The city of National City, in partnership with Community HousingWorks and San Ysidro Health broke ground Aug. 16 on a residential development which will include affordable housing, a senior center, and a health center with inclusive care for elderly residents. 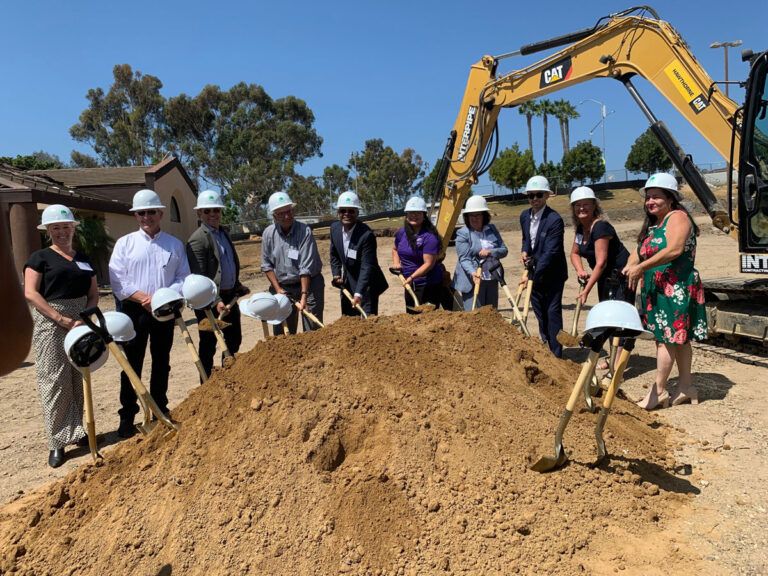 The Kimball Highland Apartments component will include about 145 affordable rental units from studio-sized to full three-bedroom family homes spanning two buildings at 1320 Highland Ave. and 1221 D Ave. Each building will have a community room, computer lab and on-site resident services.

“When I took the mayoral office in 2018, I spoke about creating a ten minute village and an age-friendly National City where an individual could walk or roll, whether it is with a stroller or a bike or a wheelchair in any direction and get to public transportation options, a grocery store, entertainment venues, health services, financial institutions and park spaces. The Kimball Highland development does exactly that,” Sotelo-Solis said.

Usually, Spear said, the nature of a housing development gives hints about whether it is going to strictly serve seniors or will also be family-oriented. In this case, he said, early conversations with city officials focused on how to create “an urban village in the heart of National City” deliberately designed to include affordable housing for residents of all ages. Working on a plan like this where intergenerational living factored heavily into the design was a first for them, Spear said.

“We did purchase an existing housing development, Alabama Manor in North Park, with the opportunity to develop a new community on the back side. Some of the seniors living in Alabama Manor now volunteer to read with the children at the newer development,” Spear said, however that was an organic development and the intergenerational relationships were not factored in from the start of the design.

A new senior center, a hinge pin of the development is being built along with the housing component. It will include a large community gathering room as well as several classrooms and a full kitchen. The city will be maintaining and operating the space in a 65-year rental agreement of $1 per year.

“This will be a really good example of taking an existing facility and being able to augment it as part of the overall plan. The senior center will have a nutrition program and others that will dovetail nicely with the PACE facility, a program of all-inclusive care for the elderly. It will be more than a place to remain active with friends and will also link with supportive programs,” Spear said.

Describing it as “a replacement-plus” for the existing senior center, Spear said he envisions the new center as not just a physical building but a community hub for older residents with infrastructure like shuttle vans being more prominent and easy connections to public transportation.

A medical office building with a new San Ysidro health clinic and the all-inclusive PACE elderly care facility will be built as the third component of the development. The federally qualified health clinic will provide primary care services and the PACE program will serve older adults so they can remain independent and in their homes for as long as possible.

“This kind of facility, which will provide full services for seniors who might still want to live at home— really, preventive care and increasing life spans are at the forefront of the discussion. I think even elected officials would say it has been challenged to provide care for local residents, particularly ones that have a more diverse population,” Spear said.

The combination of having transit service with San Ysidro Health, PACE shuttles, new bike paths being built in, and access to Metropolitan Transit System will make it easier for residents to seek medical care, Spear said.

“Kimball Highlands is the embodiment of ‘age-friendly’ intergenerational projects with amenities our residents need throughout all phases of life. It is a benchmark, our city’s first ever age-friendly project. We must look through this lens as we build up our region— this is how we continue to positively impact quality of life,” Sotelo-Solis said.

Two years in the making, the development represents over $125 million in private and public investment dollars and tax credits, the mayor said.

The project is being built in phases and, according to city officials, should be fully complete by Summer, 2024.

Thank you! Your submission has been received!
Oops! Something went wrong while submitting the form.